Saturday:
I went into this event without any real plan.  I had been sick all week and lost 10 pounds in the 9 days heading into the weekend.  I hopped onto the course to get in a quick pre-ride after the first race ended.  Then I took my pit wheels to the pit area.  At some point during this they called for staging and I never heard it.  By time I arrived at staging it was too late for my call-up, so they stuck me in the back.  If nothing else, it gave me a plan for the race.  Go hard until you can’t go any more, and then go harder.  It may not have been the most elegant plan, but I did learn something from it.  For the 40 minutes of the race I had an average heart rate of 182, which was higher than I thought I could maintain.  I ended up with a solid 60th out of 99 finishers.

Later in the day I found myself sitting with a bunch of great friends watching the pro race.  Holy shit those guys are fast.  In my race I am looking to go about 45 seconds a lap faster to finish near the front.  These guys were going 4 minutes a lap faster than me.  Watching them also showed me that you can really hammer through some of the corners that I was crawling through because I just didn’t feel like there was enough traction.  They seemed to trust that the bike was going to go where they pointed it.  Jeremy Powers held on to win over a determined looking Ryan Trebon.

Sunday:
I had a solid plan for the race today.  Make my call-up, start hard and suffer.  I dropped my wheels off in the pit area at the start of the race before mine and then started working on getting a good warmed up.  I made my call-up in the 5th row.  It was kind of neat being that close to the front without having to kill myself getting there.  Once the whistle sounded, I again tried to get by as many people as possible before the course narrowed.  I really worked on trying to trust my tires and drive through the corners during this race.  I have no idea where I was running position wise, but this was the first time that I could still see the leader at the end of the first lap in a race of this caliber   The next three laps where just a case of holding my position and gaining any that I could.  I had a much better sprint at the end and gained two spots in the final 100 meters to finish 34 out of 77 finishers.  It ended up being a GREAT race, and lets me know that what I worked on all summer should pay off.  This was far and away the best ‘cross race that I have had.

It was great seeing the crew Saturday at the pro race and even better getting to line up with a couple of good friends and battling it out on the course.  This might be the best part of racing ‘cross.  I didn’t see any pictures of the three of us together, but someone had a good one of John and Gary. 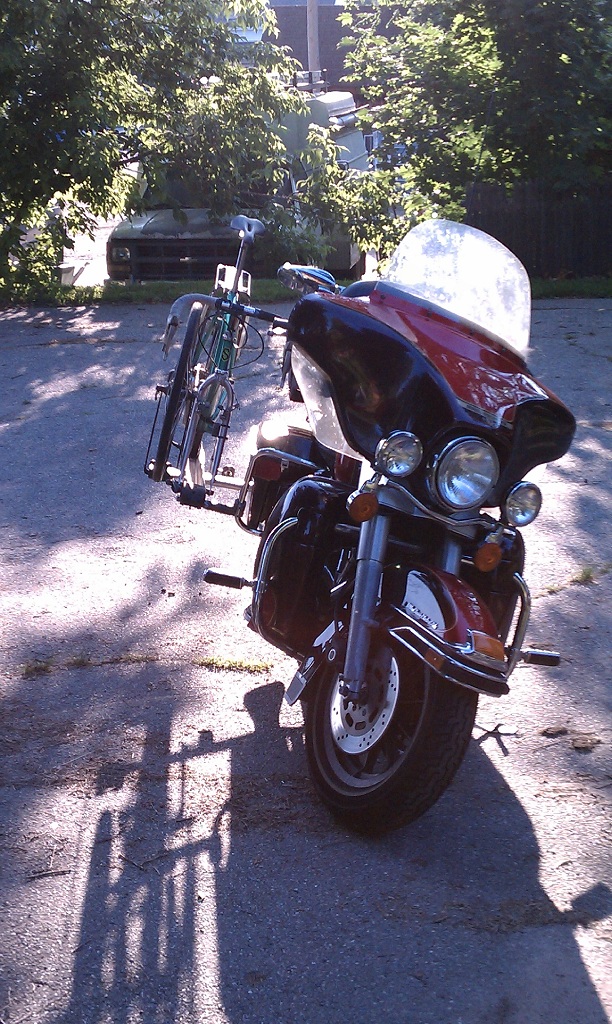 This is my work in progress bike rack for the motorcycle.  It is in its third version at this point. 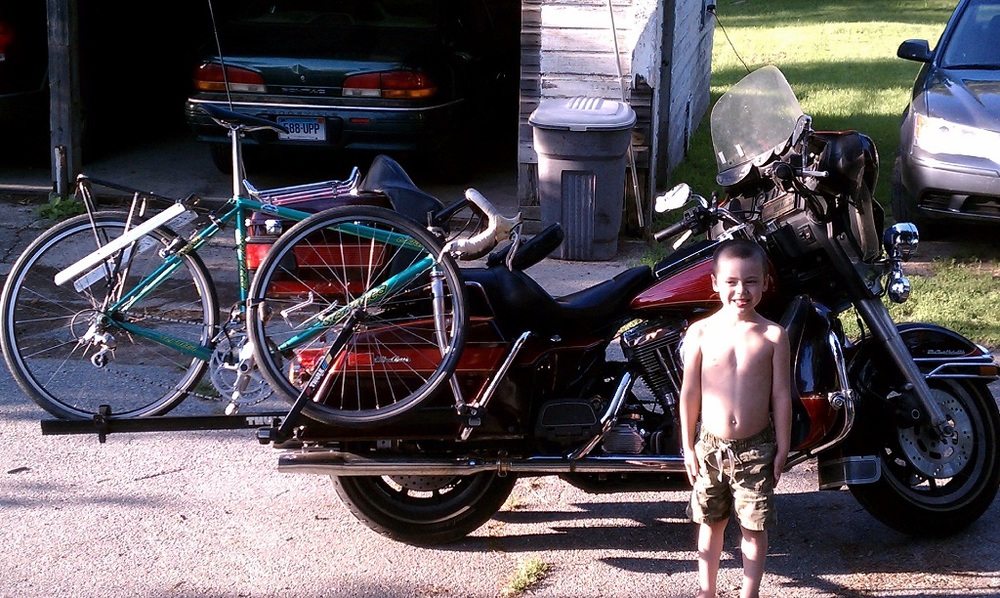 Version 2 was mounted higher and seemed to work pretty good for a couple of weeks.  Then I noticed that the bike was leaning away from the motorcycle.

In version 3 we beefed up the mounting points and added a third mounting point on the back bracket.  This seems to have fixed everything.  Used it for a couple of months before removing it and having it painted.  The whole unit can be removed or installed in about 30 minutes.