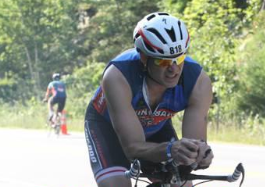 SWIM: TrainingPeaks Data
Target Time: 0:45:00
Race Time: 0:42:54
I was so nerves before this swim that I tore my wetsuit twice trying to put it on.  This was going to be my first group start in a triathlon so I really had no idea what to expect.  Once the race started I started to relax and try getting into a rhythm.  Unfortunately that was not going to happen.  Instead I struggled with the swim the entire time I was in the water.  Overall I felt the swim went terrible, but when I saw my time I was pretty happy.  B+

BIKE: TrainingPeaks Data
Target Time: 3:00:00
Race Time: 2:48:13
I had pre-rode the first and last 8 miles of the course on Saturday, so I knew the first 6.5 miles were mostly uphill.  It was never a big climb, just a long rolling climb.  The plan was to just keep it nice and steady for this part and then put in a good effort until the big climb that started around mile 12.  After that climb it was 35-38 miles of just getting into a nice steady grove and try to maintain around 220 watts.  This worked out better than I could have ever hoped for.  I had great legs for the two big climbs on the way back in and just buried myself for the last 6.5 downhill miles into the finish.  A+

T2: 0:05:23
It was looking like rain before the start, so I left my T2 stuff in my transition bag to keep it dry.  This cost me a little time, but at least I didn’t have to worry about having wet stuff to start the run.

RUN: TrainingPeaks Data
Target Time: 2:15:00
Race Time: 2:32:28
Before I was even out of transition I knew that I had no legs for the run.  Instead of killing myself and trying to find something that was not there, I just immediately fell into a run/walk routine that I was sure would get me to the finish.  I really liked the course and wish I could have found some way to run a little more but it was not to be.  D-

Summary:
I was using a training plan to get ready for Timberman and was questioning the running volume for the last month before the race.  Unfortunately I decided to trust in the training plan instead of what my body was telling me. I just do not think that I was doing even close to enough miles, so coming off the bike and being a little tired I was doomed.  Going into the half marathon that I ran in April I was doing 25-30 miles a week, but the training plan that I was working with only had me doing 10-15 miles a week.  Oh well, live and learn.

On the bike I wanted to average 220 watts.  When I pulled my data off the Garmin, I found out that I only averaged 190 watts while going under my target time.  I’m not sure if means that I had great legs that day, or that the course really suited me.  I will say that I really liked the course.  I did have on problem on the bike.  I missed my pocked when putting my gel flask away around mile 20 and didn’t find out until the next time I went looking for it.

Based on my result and how I felt after this I have decided that I will go ahead and do a IRONMAN next year.  Not sure if it will be IRONMAN Maryland or Louisville.

I started the year laying down a good base to build on for my first IRONMAN 70.3, well actually it will be my first triathlon period at this rate.  I was flying a little too early in the year and decided to back off a little bit so that I wouldn’t get burned out before the actual race got here.  Somehow I lost track of time and fitness before noticing that Timberman was only 8 weeks away.  Not sure how I missed that one, but now I am under the gun and working my ass off to get back to where I was two months ago.  I just finished week two of a four week block and I am starting to feel the legs coming back around.

Yesterday i did my first dress rehearsal to see where I am and was mostly happy with the results.  It was a test for the bike and run using the nutrition plan that I have for the actual race.  The bike was better than I would have expected.  I was trying to stay around 85% of my FTP for an average.  To my surprise I managed to average 19.7 mph of my 28 miles test loop without exceeding my target effort level.  I never expected to manage that.  I will admit that I really should have drank about a half a water bottle more than I did on the bike.

I really need to start looking around for a couple of smaller local triathlons to do to get my feet wet soon.  I really would rather not do Timberman as my first triathlon.  Well that’s all for now, off to get a massage.