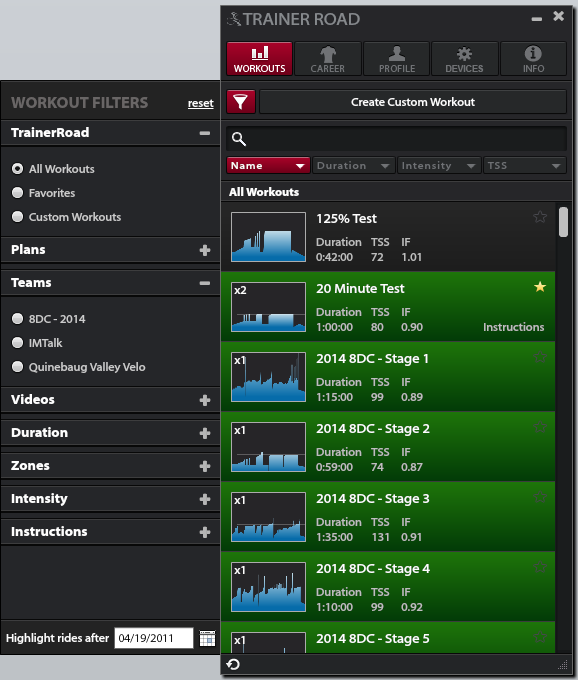 I’m not really even sure where to begin with TrainerRoad, but I can say it may have had the biggest effect on my training ever.  For a couple of years all I read about was training with power and how if you were not doing that then you were not training effectively.  I really could not justify the cost of a power meter without knowing if it really would be effective, or just generate more data to look at.  A friend at work sent me a text message about this next web site that offered virtual power based on your trainer, so I decided to take a look at it.  I took a look at their web site and found that I already had everything that was needed except the Ant Stick for my computer.  I ordered the Ant Stick and signed up that same day.

It has been really neat to see that changes that have taken place in TrainerRoad since I started using it in December of 2011.  Some of the changes have been:

When I first started using it I was mostly using it with Sufferfest videos, which changed the whole suffer factor for those workouts.  Gradually I started to try some of their workout and was really impressed with them.  This year I used their “Half-Distance Triathlon Mid Volume” plan and have seen a big improvement in my time trial performance as well as FTP.

The last couple of years TrainerRoad and The Sufferfest have worked together to put on the Tour of Sufferlandria, which is a 9 day stage race from the comfort of your trainer.  They have also done a 8 Days of California stage race that goes on during the Tour of California.  These are great events to help kick your training to the next level.

You can look at your history on their web site and see all your workouts as well as your TSS for the last 10 weeks.  If you are anything like me, by this time of year your TSS for the last 10 weeks starts looking pretty bad, because I am outside more than on the trainer.  If you are part of a team, you can see what the other member of the team are up to.

There are two plans for TrainerRoad.  There is a $10/month plan or $99/year plan, both of which come with a 30-day refund period.

Somehow I let the stupid part of my brain make decisions for the rest of me the weekend before last.  I had planned on doing the Battle of Burlingame 6 Hour MTB race, but I knew I also needed to work on dealing with transitions for the upcoming Half Ironman.  It just happens that there was a duathlon just down the road from me than is known as being good for first timers.  Well the duathlon had a start time of 8:30 am, and the Battle of Burlingame XC race, not the 6 hour event, had a start time of 2:30 pm, so why not do both!

Race of Rams Duathlon (First race of the day)
The race was a 1.5 mile run, 14 mile bike and then a 2 mile.  This was the first duathlon I had ever done, so I was not really sure how to approach it.

I decided to go out easy on the first running leg and was a little surprised at the end when I found out I had run a 10:46.  That was a 7:11 pace and 19th fastest run, which is not something I would have ever expected.

I felt really good on the bike right from the start. so I decided I would push a little on the first lap and see how I felt at the start of the second lap.  I was picking off other riders here and there so I was pretty sure that I had a good ride going.  At the end of the first lap I was still feeling pretty good so I decided to go all in on the second lap and just buried myself.  I was pretty sure that it had been a good ride when I hit the transition and there were only 6 bikes hanging there.  The result was a 43:46.5 bike leg that was good for the 5th fastest bike leg of the day.

I didn’t want to ruin what was turning into a good race on the last run so I went for it.  The second run was an out and back that was all uphill for the out part.  Almost immediately I had three runners go by me, and at the turn around there were two people right behind me.  I managed to sort of hold them both off to the finish.  Okay one passed me and then I managed to stay with her until the last 100 meters where I passed her back.  Net result for the second run was a 14:41.3 which worked out to a 7:21 pace.

The Battle of Burlingame (Second race of the day)
I went out to warm up before the race and was not real impressed with the hill at the start, until I found out that the course was pancake flat.  That pretty much told me that there was nothing left in the legs and it was going to be a real long race.  I put in a good hard effort for about the first 1/2 a lap and then decided that I needed to just back off and try to finish.  On the 3rd lap someone passed me and said he was surprised I was still even out there after racing in the morning.  My only comment to that was that I didn’t really think the pace I was riding at really counted as racing.  That was maybe not the most polite thing to say being that he was just catching me at that point.  After a quick laugh he more or less paced me to the finish.  My finishing time was 1:38:53 which was good for 14th.  I was a little surprised by my lap times.  I figured they would drop off really bad after the first lap.  The second lap was only 2 minutes slower than the first, and the third lap was actually 20 seconds faster than the second lap.

This may have been a really good race course and I would love to try it again without the dead legs.  Maybe next year if these two events do not fall on the same day.

For some reason I decided to register for the IRONMAN Timberman 70.3 later this year.  I’ve never done a triathlon of any length before, so I decided to jump right in and see how things go.  At some point my brain must have switch gears and figured out that I should really put some effort into this, or I was going to be in for a long and most likely not enjoyable day.

One of the first things I wanted to get out of the way was working on the run.  I ran track in high school, but I was a sprinter.  After high school I ran a little and have even done a few 5K races.  Not sure that is the makings of a good half marathon race.  In mid-February I started to train for the Willi Whammer 1/2 Marathon on April 26th.  I started easy and just kept slowly adding distance and managed to get to the point where I was up to 11 miles comfortable.

Well race day came around and I was greeted to pouring rain and low 40’s for a temperature.  Basically I could not have asked for better weather, yeah right.  Well I decided to make the best of it and just go out and run.  I had originally been targeting a 2 hour time, but with the weather I figured I was going to slip a little on my target time.  Most of the hills were located in the first 6 miles of the race.  I’m not sure if it was due to the temperature or what, but I really struggled with the down hills.  My shins were killing my ever time the road went down and I was just about walking.  Fortunately I felt strong on the up hills and flats or that first half would have taken forever.  The second half of the run was just a case of keeping a steady pace and try having a little fun, which I’m not really sure that I pulled off that last part.

All in all I was happy with my time even though I missed my target of 2 hours.  I’m not sure when the next half marathon is going to be, but I am going to be lining up at a duathlon the following weekend.