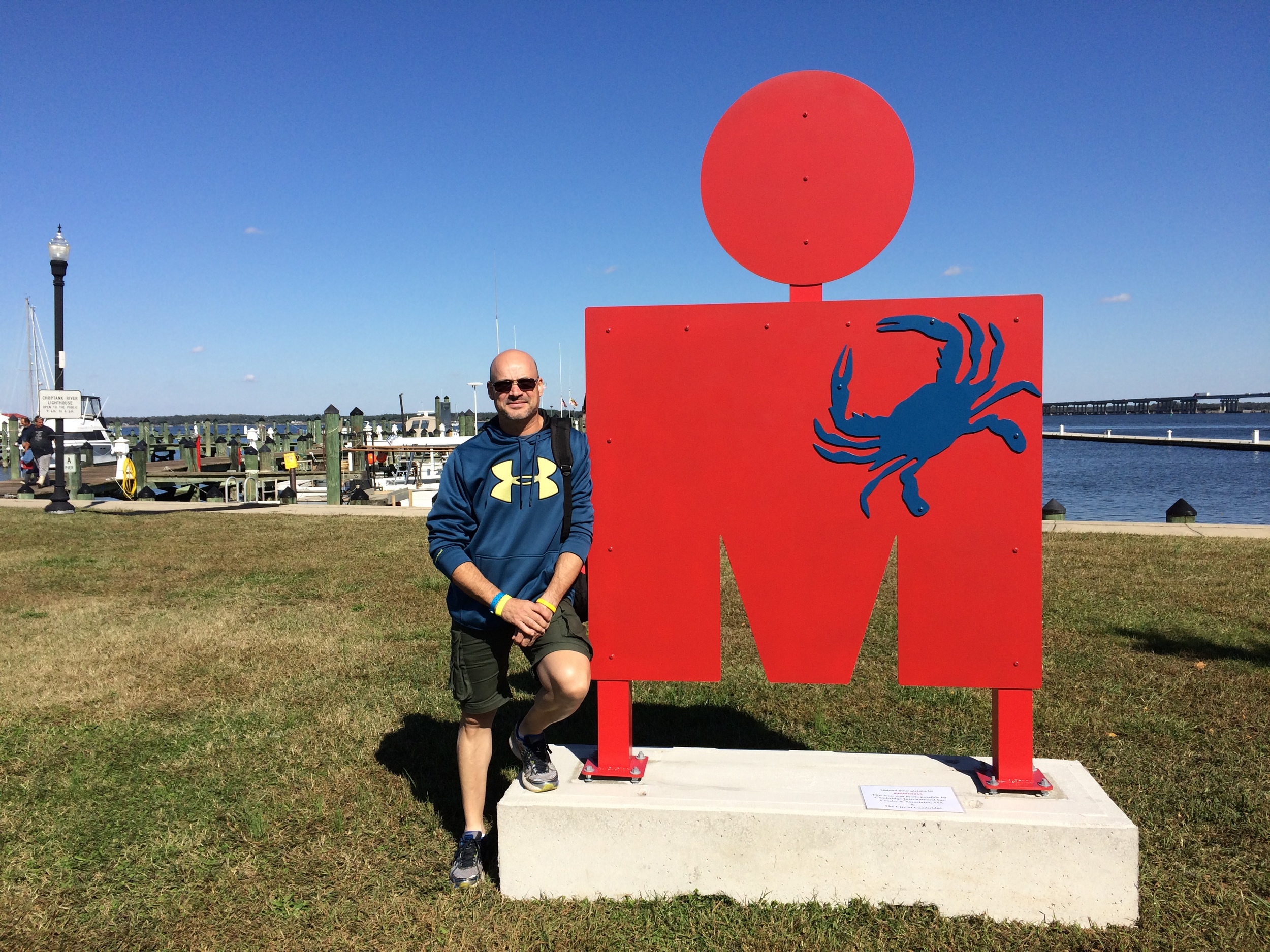 Before I even really get into the race report I need to say thanks to everyone that helped make this possible. I know that the massive amount of training put lots of pressure on everyone in the family to help out in ways that they are not normally asked, so THANK YOU. I am have also been a little bit of a pain in the ass at times during my training, and then again during my taper.

I also had a lot of friends that stepped up and helped out during the year. Including a few that may have wished that I would quit messaging them with constant questions.

It has been a fun journey, so again THANK YOU to everyone who played a part in it.

SWIM
Target Time: 1:30
Race Time: 0:56:49
Nothing went the way I wanted before the swim even started, and I ended up having the best swim ever in a race. The race was scheduled to start at 7am, but there was a small craft advisory so they couldn’t get the safety boats launched. So everyone stood around in 42 degree weather wearing just their wetsuits freezing. We couldn’t even get in the water to warm up because of the advisory. Then it was announced that the race would start at 7:30 and the swim was going to be shortened to 1.2 miles. That didn’t make anyone happy, and everyone was letting them know it. 20 minutes later it was announced that the course was going to be changed to allow us to do 2 laps for a total of 3000 meters, so it would be a little short, but still an official IRONMAN. YEAH!!!! A couple minutes into the swim I started to have what I thought was a panic attack, but something felt different this time. It took a couple minutes to figure out that I was cooking in the wetsuit. I grabbed the collar and let some cold water in and then felt better instantly. Other than that the swim was really uneventful, which was a nice change for this year. A+

T1 0:14:17
Transition was really slow because of the weather. It had warmed all the way up 45 degrees at this point. There was no way that I was going to go out on the bike with wet anything on, so this was a full change with damp skin. The changing tent was packed, so there was also some standing around waiting to even get in. Painfully slow, but completely out of my control.

BIKE
Target Time: 5:30:00
Race Time: 5:46:57
I do not think I could have scripted the day much better other than the wind. I drank 3+ bottles of water and 2 race bottles. I also had 2 packs of GU Chews and a piece of beef jerky on the bike. The bike worked perfect. I was targeting 190 watt average on the bike and finished with a 185 average.  Without the steady 25-30 mph winds I’m pretty sure I would have been well under my target time. There were a couple time early on the bike that riders would go by me like I wasn’t moving and I really wanted to go with them, but the mantra of the day was “Make this the most boring ride of your life.” And I passed quite a few of these riders again by the end of the day. A+

T2 0:08:19
Again I did a complete change. The temperature was already starting to drop, so I didn’t want any of the damp cycling cloths on at the start of the run. We also didn’t have bike catchers, so we had to rack our own bikes. This is a little different than at a standard IRONMAN event.

RUN
Target Time: 4:30:00
Race Time: 4:46:12
I was comfortable that I had done everything I could on the bike to setup the run, so I was willing to let things start a little faster than I had originally planned. Through the first 5 miles I was holding around a 9:20 pace. I would have loved to try and stay there, but this was going to be the longest run ever for me and I decided to be a little conservative. I slowed to a 9:40 pace for miles 6-10, and then a 10:30 pace until mile 21. At mile 21 I had my first and only issue all day. My legs said enough is enough, we’re done. I walked for about 4 minutes while trying to find something to get me moving again. I had a bet with a good friend that I could do the run in under 5:15 with the loser buying the beer. I generally don’t even drink beer, but for the rest of the run I was just repeating “I am not buying the beer.” After that little hiccup, I managed to hold a 10:40 pace to the end. My overall pace was a 10:09, which is pretty good. My best pace prior to this was an 11:11 in a half IRONMAN. For nutrition on the run I was doing BASE Electrolyte Salt with water at every aid station. I also used 3 packages of GU Chews and a piece of beef jerky. I had two race bottles with me, but really did not feel the need for the extra calories. Added bonus was that when you cross the finish they have catchers, and to my surprise my wife was there in case I needed someone. I never expected that, so pretty cool. A+

SUMMARY
What an incredible day. Everything seemed to be working against this even, but the people that were putting it on did and incredible job of rallying the troops and putting on a first class event. Everything went pretty much to plan which never happens, so now I’m worried that I may have just had the best race at this distance that I will ever have. Guess I’ll have to put that to the test next year. Maybe try and go sub 11 hours. And for anyone that was wondering, yes I did get the tattoo.